All content of “Bicycling the beauty around us” is
Copyright © 2016-2022 Linda J. Gross.  All Rights Reserved.

We vacationed the week of June 25 through July 2 in Hudson, Ohio. We brought our bicycles with us, intending to bicycle the entire Ohio & Erie Canal Towpath Trail in Cuyahoga Valley National Park several times during the week. Because of extreme heat and high humidity and rain we ended up riding only a small portion of the trail.

On Saturday, June 26th, we drove to Cuyahoga Valley National Park and bicycled the Ohio & Erie Canal Towpath Trail from the Ira Trailhead to Peninsula and back.

This is a video that Bob took with our GoPro7 camera during our bicycle ride.

Highlights of our ride included obtaining a national park passport stamp in Peninsula, watching a train cross over above the trail, and seeing a Great Blue Heron just south of the Beaver Marsh. We began our bicycle ride at approximately 9:30 am and finished at 11:07 am (1 hour 30 minutes and 48 seconds later). I took only two pictures. 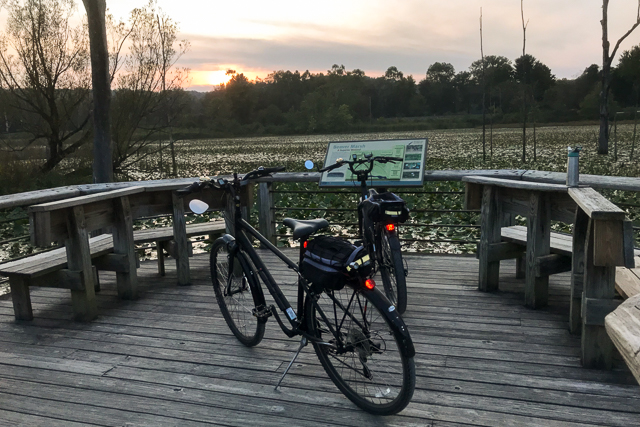 As stated in my previous blog post, we spent the past weekend in Hudson, Ohio.  We went for a short morning bicycle ride and hoped to go on a longer ride on the 81-mile Ohio & Erie Canal Towpath Trail that runs through Cuyohoga Valley National Park.  About 21 miles of the 81-mile trail runs through the park.

The last weekend of summer was certainly a hot one.  It was too hot for Bob and me to enjoy a bicycle ride on Saturday afternoon.  We did, however, go on a shorter ride that evening on the canal towpath trail, when the temperature dropped to a more comfortable level.

We chose to begin our ride at the Beaver Marsh (Ira trailhead).

The Ira trailhead has statues that we had not seen on previous visits to Beaver Marsh.

As you can see, we were losing daylight.

We added only 3 miles (round trip) to our bicycle odometers.  We rode from Beaver Marsh to Szalay’s Market (the Everett trailhead) and back.

We arrived at Cuyahoga Valley National Park shortly before 9:30 am. We parked at the Boston trail head. We rode our bicycles to the nearby Boston Store Visitor Center, where I stamped our National Park Service Passport.

We rode our bicycles on a portion of the Ohio & Erie Canal Towpath Trail that runs through Cuyahoga Valley National Park.

We rode from the Boston Visitor Center south to Lock 26, just past Beaver Marsh, and back. My trip odometer read 15.02 miles, upon our return. The Ohio & Erie Towpath Trail follows the same path that mules walked to tow canal boats loaded with goods and passengers. Within the national park, the trail is level and hard-packed for people using wheelchairs, bicycles, and strollers. It is possible to bicycle one way and return by train for a low cost using the Cuyahoga Valley Scenic Railroad Bike Aboard! service. We didn’t make use of this service. We rode our bicycles both ways.

We passed by six locks, while on our bicycle ride.

During our northbound ride, we stopped for lunch at Szalay’s Food & Market, located just off the towpath near the Hunt House.

After lunch, we enjoyed looking at all the Autumn things.

During our bicycle ride south, we did not stop in Peninsula. We remedied that by stopping on our northbound ride. We stopped at the Visitor Center, where we learned that a historic steam engine would be making its way through Peninsula soon. We hung around to wait for that train.

Each year, the Cuyahoga Valley Scenic Railroad works with the Fort Wayne Historical Society to bring historic steam locomotive No. 765 to the Cuyahoga Valley for its “Steam in the Valley” event in September.  During the two-hour trip through the Cuyahoga Valley National Park, passengers can hop off the train to take photos. Exactly where is a secret, to keep congestion in the area down.

From Peninsula we continued making our way back to the Boston trail head.

Once our bicycles were securely attached to our bike carrier, we departed the park and drove to where we would be spending the night.

We checked into Best Western Plus West Akron Inn & Suites at approximately 3:30 pm. We relaxed in our room until 5:00 pm, when we left for dinner.

We ate dinner at the Outback Restaurant, located near the hotel. The evening’s dinner was celebratory in recognition of our upcoming 20th wedding anniversary (which was on September 26th).

I got up at 5:30 am the next day.   Bob had been up for an hour already. We got showered and dressed. Breakfast wasn’t until 7:00 am, but we wandered down about 10 minutes early and found it ready for the taking. We ate a hearty breakfast of waffles, eggs and sausage.

The tumble on my bicycle happened on our way to the Boston Store Visitor Center, approximately 30 minutes into our ride. I stopped to take a picture of a spider web. Unknown to me, the trail was cupped where I stopped. When I put down my foot, it didn’t meet ground. Down I went. My forehead came into contact with a fallen log. The impact snapped off the visor on my bike helmet and bent my eyeglasses.

Two joggers stopped, a man and a woman. The man, along with Bob helped me get up and back on the trail. I think the jogger picked up my bicycle. The joggers didn’t leave until I assured them that I was OK. My tumble occurred on the Cuyahoga River side of the trail. It was a gentle slope to the river a distance away. I am glad that my tumble didn’t occur on the canal side of the trail, as there was nothing to stop me from falling into the canal!

Once I determined that all was well, after my tumble, the first thing I did was look for the spider web.  I feared I had taken it down with me, when I fell.  I didn’t, and that fact made me happy.

I had a slight headache, after my tumble, but it didn’t stop me from completing our planned ride. I did, though, consider turning around and returning to the Canal Visitor Center soon after the accident happened. I am happy that we didn’t turn back. We would have missed seeing two great blue herons, five deer, and a snapping turtle.

One of two Great Blue Herons 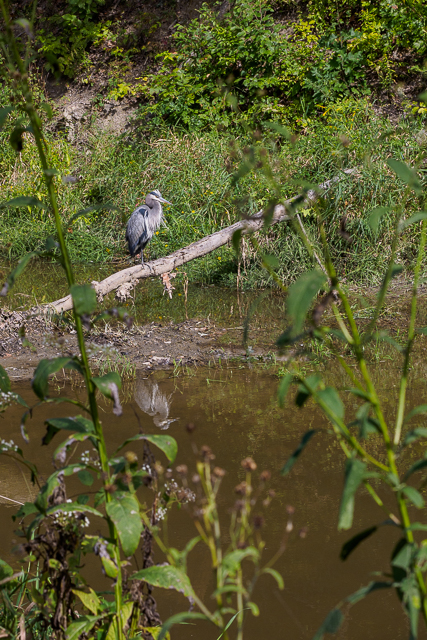 I didn’t get any pictures of the deer or snapping turtle.

Along the trail, across the canal and highway, was a beautiful brick home.

The information on the sign invited us to explore the Frazee House’s exterior.  We didn’t do any exploring, opting to do so on another visit.

Earlier I mentioned that the Ohio & Erie Towpath Trail follows the same path that mules walked to tow canal boats.

Oh, when we arrived at the Canal Visitor Center this morning, several other bicyclists were there. Many of the bicyclists were headed for the train, with plans to ride south to Botzum and bicycle back–a distance of 18 miles. We hope to ride the train one day and bicycle back. You can’t beat the price of $5.00 each. I know we can bicycle the distance, given we rode over 18 miles today!

Our two-day bicycle miles ridden total was 33.70 miles. We have ridden almost the entire Ohio & Erie Canal Towpath Trail located in Cuyahoga Valley National Park. We haven’t ridden the 1.8 miles between the Canal Visitor Center and Lock 39 or the 2 miles from the Ira trail head and Botzum. We would enjoy riding the entire trail, in one direction, and hope to do so someday.

We made it back to the Canal Visitor Center at approximately 12:45 pm.

We departed Cuyahoga Valley National Park shortly after returning from our bike ride.  We stopped for lunch in Medina, OH at Quaker Steak & Lube. A couple hours later we stopped for dessert — custard ice cream — at Mr. Shivers in Waterford, PA.

We returned home at approximately 5:45 pm.

What a wonderful weekend and a great way to celebrate our 20th wedding anniversary!