All content of “Bicycling the beauty around us” is
Copyright © 2016-2020 Linda J. Gross.  All Rights Reserved.

Late this afternoon Bob and I went for a bicycle ride at Allegany State Park.  We rode around Red House Lake, adding 4.38 miles to my bicycle odometer.

Leaving Hollyloft Ski & Bike, we drove to Allegany State Park near Salamanca NY. We entered the park via the Quaker Lake entrance. Our first stop was at the Quaker General Store, where we ate a light dinner. Bob had a BLT wrap; my dinner was a hot dog.

After dinner we drove to the Red House Lake Beach parking lot.

We rode around Red House Lake (a distance of approximately 3 miles).

I believe the temperature, which was in the mid to upper 80s, the hot sunshine, and what I wore to ride caused me to be grounded a couple times during our ride. I wore jeans and a t-shirt.  I believe I got overheated.  I felt weak, faint.  I was  breathing heavier than normal, finding it difficult to catch my breath. My chest hurt too, although that may have been caused by indigestion.

This wasn’t the best ride, but I do really LOVE my new bicycle!

This morning we went for a bicycle ride in Spartansburg, PA.  We returned home from that ride around 11:30 am.

At 3:15 pm we left home and drove to Allegany State Park.  We went for a bicycle ride around Red House Lake.

All total I bicycled almost 10 miles today.  I sure had a workout.

We wanted to go to Allegany State Park this morning to ride our bicycles.  Rain postponed our trip until this afternoon.

We left home, en route Allegany State Park at 1:20 pm.   This is our first trip, with our new bicycle carrier.  The roads had dried off in places, damp in others.  It was an overcast and cool day.  The temperature hovered around the 60 degree mark.  The rain stayed away, for the most part.  A few sprinkles fell, while driving through Scandia.  A few sprinkles (and drizzle for a short time) fell, as we began our ride at the park.

The portion of the trail that we rode was 1.5 miles each way and contained both hilly and level parts.  I walked and rode.  We saw a deer on the trail (wish I had gotten a picture) and baby groundhogs and one parent.  We saw the groundhogs during our return trip.

We didn’t see the deer again, until we were exiting the park (no picture again).

We departed Allegany State Park around 3:30 pm.  It felt so good to be riding again.

We went to Allegany State Park yesterday for a bicycle ride. It was our first time riding bicycles in the park, as well as the first time transporting our new folding bicycles to a ride destination.  Both bicycles fit nicely in our back seat. 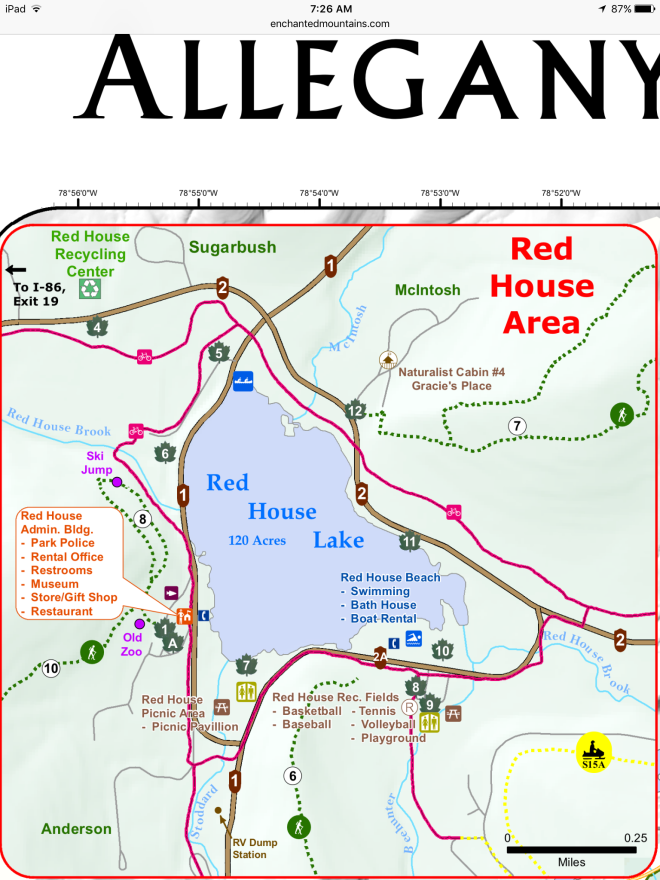 We rode our bicycles around Red House Lake, a loop trail of 3 miles. Our starting point was at the Red House Boat Rental parking lot. We rode clockwise around the lake.  The bicycle trail was very nice, paved throughout. We rode level with the lake, below the lake (at creek level) and high above the lake. I both rode and walked my bicycle on the trail. Eventually I hope that I am able to ride all the way around the lake.

Across from this bridge is the new Red House Nature Boardwalk, which we visited for a short while.

A short distance from this point the bicycle trail went through a forested area and down a steep slope.  There was a sign that suggested walking bicycles down the hill.  It didn’t look that steep, though, so we rode our bicycles down the hill.  At the bottom of the hill the bicycle trail crosses over ASP 2.  It isn’t easy to stop at the end of the hill.  I should have respected the “walk your bicycle” sign in this instance.  Thankfully, I was able to stop (barely), and there wasn’t any traffic on ASP 2!

After crossing over ASP 2 we quickly arrived at the Thomas L. Kelly Covered Bridge.

From the covered bridge, we returned to our starting point.  We found a lovely site for a picnic.

After lunch we left Allegany State Park.  Rather than go straight home, we decided to go to Marilla Reservoir (Bradford, PA) — the subject of my next blog post.