All content of “Bicycling the beauty around us” is
Copyright © 2016-2020 Linda J. Gross.  All Rights Reserved.

Bob and I went for a bicycle ride this past Saturday (June 10th). 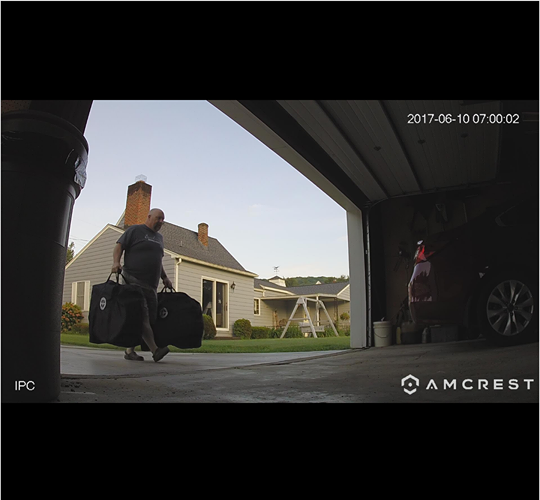 Bob is carrying our folding bicycles from the house to the car.

We ate breakfast at Richard’s Family Restaurant in Youngsville, PA. Bob ordered an omelet filled with onions, mushroom and cheddar cheese with rye toast and sliced tomatoes on the side. I ordered scrambled eggs, bacon and French Toast. Breakfast was good and quite filling.

Leaving Richard’s, we began our drive to where our bicycle ride would begin.

Lake Wilhelm is the centerpiece of Maurice K. Goddard State Park.  We have visited Lake Wilhelm a few times, circling the lake by car.  This was the first time that we planned a bicycle ride at the lake.

The John C. Oliver Multi-Purpose Loop Trail is 12 miles long. The paved, predominantly off-road trail traces the northern and southern shores of Lake Wilhelm.  The loop trail is a pleasant, largely wooded loop around the lake.  We began our ride at Boat Launch #4, which is located on the lake’s north side.

We arrived at Boat Launch #4 at approximately 9:30 am.

A flock of geese flew overhead, as we were preparing for our bicycle ride.

We didn’t begin our ride until 10:00 am. It took approximately 30 minutes to unfold our bicycles and attach a trunk bag to each rack. The next time we go for a ride less preparation time will be required, as the trunk bags already will be attached. We planned to ride from Boat Launch #4 to the dam and back, which I had read somewhere on the Internet was an approximate 5-mile round trip. I guess I read the information incorrectly, as it was about 5 miles ONE WAY to the dam from Boat Launch #4.

The trail on the north side contains several sharp bends and short, steep runs that I found challenging. The payoff, though, are scenic vistas overlooking the water.

Once we reached the dam, we decided to continue rest of the way around Lake Wilhelm, rather than back track, as it would add only a few more miles to our day’s ride.

Before reaching Boat Launch #1, one can choose to stay on Creek Road or take the bike trail up over a steep hill.  Bob took the high road; I stayed on Creek Road.

We found lots of horses and more Amish buggies at Boat Launch #1.  I am certain that one of the horses pulled the Amish buggy that we saw earlier.

Picnic areas are abundant and restrooms can be found at each of the four boat launches around the lake.

Actually we had about 2 1/2 miles to go, as we entered the trail about 1/2 mile from the start.  Oh, and in the photograph displayed above, I was not walking my bicycle at this point.  I got off to take a picture of the 10-mile marker.  I DID walk my bicycle, though, several times during our 12-mile ride!

The south and north portions of the John C. Oliver Multi-Purpose Loop Trail are connected via Lake Wilhelm Road.  You can see Lake Wilhelm Road (across the lake) in the photograph displayed above.  There is a large berm along the side of Lake Wilhelm Road, so traffic was not a problem. 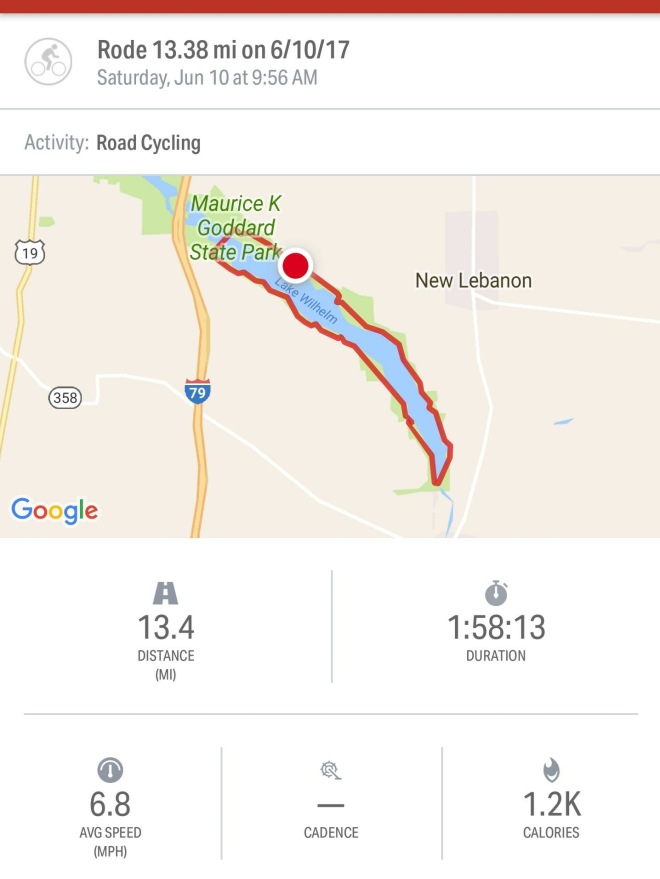 The MapMyRide app records moving time. We made stops (to take pictures and to rest) equaling approximately an hour. The last 1/2-1 mile didn’t go well. I had to make frequent stops because I felt weak and dizzy. Eating a chocolate bar, when we made it back to the car, quickly ended the weak feeling and dizziness. We carried water with us. We need to carry candy too, e.g. hard candy or protein bars that won’t melt.

From Lake Wilhelm we drove to Erie. We ate a late lunch at Texas Roadhouse, using a gift card for a portion of the cost. Lunch was good and filling as well.

We began our drive back home, after lunch. We made one stop along the way. We stopped at Walmart in Corry, where we purchased two bicycle seats.  Our new bicycle seats are wider and more cushy than the seats currently on our folding bicycles.  Our next bicycle ride will be more comfortable on our buttocks!

We both enjoyed the John C. Oliver Multi-Purpose Loop Trail and would like to ride it again, perhaps sometime during the autumn months.